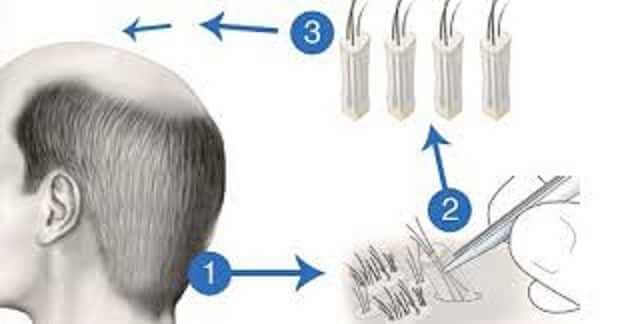 Those in need of Choi hair transplant technique

In order to resort to the technique of Choi pens for hair transplantation, it must be taken into account that this situation applies to a group of cases, the most prominent of which are:

Those who suffer from hereditary alopecia, for sure those who have lost their hair for any reason will need an operation through the technique of Choi pens, but it is precisely the hereditary baldness that is most in need of Choi pens, it completely eliminates it.
Those who have alopecia areata, a rare disease that affects the hair of the head and leads to hair loss, which definitely requires a transplant using Choi pens, and alopecia areata is a genetic disease in the first place.
Those exposed to accidents and burns, at any time, and in any form, a person can experience an accident or burning that leads to a lot of hair loss, and the technique that is best able to get rid of the effects of these fires and accidents is the technique of Choi Pens.
Suffering from the lack of hair density in certain areas, and this may be due to aging or disease, so it is advised to use the technique of Choi pens to get rid of this matter in an optimal way for it.
Women are unable to shorten or cut their hair, and this can happen for any reason, but the proposed case remains the same, which is resorting to the technique of Choi pens to solve the problem permanently.
Things to stick with before using hair transplant using Choi Pens

When thinking about implementing the hair transplant process through the technique of Choi pens, for sure there will be assurances regarding a set of instructions that must be adhered to, the most prominent of which are the following:

Carrying out the necessary analyzes and accurate examinations, and such matters in the first place are supposed to be the center that pays you for it, as the center is interested in conducting the operation after all things are appropriate, and this is determined through medical examinations.
Stopping alcohol, smoking, and drugs. Such matters lead to some scars and wounds during the procedure.
The use of loose wide clothes during the operation period, and this helps to take the patient’s comfort better and does not confuse the situation either before or after the operation, and loose clothes are definitely an essential need in any operation.
Rest for a good time, and that must happen before the operation so that the person does not go to agriculture and is exhausted in any way.
Considering eating a light breakfast and not drinking stimuli, you are not performing a process that makes you forced to not eat and drink later, so you do not have to overeat and take lightness as much as possible.
How is hair transplanted through Choi pens?

For a person who is undergoing hair transplantation through the technique of Choi pens, it will be extremely necessary to take into account his need to know how to perform the operation, for such a point depends on a lot of things, and the process is conducted according to several stages and steps, most notably the following:

Local anesthesia for the operation areas: In fact, such a step is obvious to be present in any hair transplant, but some cases require general anesthesia and another that requires local anesthesia, as the doctor considers appropriate, but this particular technique requires local anesthesia and can Use it as a paint or injection.
Extracting the selected follicles from the grant area and preparing the cultivation area: this step is done quickly and intensively, as it is among the main advantages of the technique of grilling pens that it does not need much time spent placing the follicles in a solution and so on, it is directly grown.
Follicular cultivation directly: The cultivation here is smooth and safe due to the nature of the choi pens, but this does not preclude the importance of an experienced element in the doctor in charge of the operation, as well as the implant directly to ensure that some wounds and scars disappear.
Intensification of the number of pens if the need for more than one follicle: It is natural that 12 pens be used in the case of medium operations, but when we have large quantities of follicles in need of cultivation, consideration is given to intensifying the pens to finish the process in one sitting, and this is another advantage of Choi Pens Technology.
What are the main advantages of using the technique of Choi pens in hair transplantation?

Resorting to the technique of Choi pens in hair transplantation simply means that we are facing a very distinct technique, and that technique may be similar to some other techniques in how, but it remains a favorite and distinct from them with some of the advantages that are the following:

It can be used in hair transplantation without the need for shaving: this is actually a very great advantage, as it can be done through the transplant without there being an opportunity for a pre-holiday is shaving the hair and so on.
It can be used to intensify hair: we are not talking about just a technique through which a traditional process can be performed, but also there will be room for the hair to come out at an appropriate density and to be determined as well as the direction of natural growth for it, and this is definitely required.
It does not cause any damage to the hair follicles and does not produce cuts or scars: this is really a very big advantage to consider, as with consideration of some other techniques we will find that they are often the cause of side effects after their end.
You do not need to open advance channels: If the prevailing system in the rest of the techniques is to open channels that can be used later in agriculture, the technique of Choi pens does not target that, so all there is to use the pen in the implementation of all stages of the process.
A very short recovery period: Because Choi Pens technology does not lead to any type of problem and does not require anything before it, this will definitely cause a very short recovery period, so the patient feels as though he did not perform this operation in the first place.